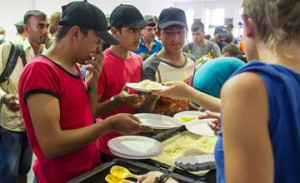 Returning to India after a month-long stay in Germany, my overall impression is that my native country is going through a paradigmatic transformation. I have witnessed a new turbulence, but also a never-seen-before energy. Rarely has there been so much polarised and passionate discussion in the public domain as well as in the political field. Political parties fail to project one single viewpoint; party discipline is abandoned in favour of multiple views and arguments. The arrival of hundreds of thousands of refugees, mainly from Syria, has not left a single German citizen untouched.

While crisscrossing the country to give lectures and book-readings, I met a variety of people, both friends and strangers. To my surprise I realised that virtually every person was in some way involved in solving the refugee problem. A retired doctor had offered his services to the city health department; a young social worker offered professional guidance free of charge; a retired school teacher joined the staff of a school for migrants to teach German; a retired diplomat who lives alone, accepted two Syrian refugees in his home for several weeks; others collected second-hand winter clothes. The churches and social service organisations are rising to the challenge in a manner I had not expected. This general surge towards accommodating the newcomers is in striking contrast to the more complex public debate, as it is mirrored on television, in newspapers and in the market-place.

The public debate demonstrates the fear and the concern that has overwhelmed a large section of the population. This fear moves especially into two directions: One is that there is going to be no end to the stream of refugees and that this will create a chaotic situation for the entire population which has learnt to live in comfortable calm and with a firm infrastructure. Two, the large majority of the refugees are Muslim and if all of them settle within German borders, the demography of the German people would change markedly. The resulting social and cultural public life cannot be imagined, it seems totally unpredictable.

So even those who have a fine pension and sufficient property and need not worry about their material future feel threatened.

The last few months have created a political and public discourse which is directed towards welcoming the refugees. And after all, what else can a government which wants to be human and humanitarian do but accept the thousands of people, men, women and children, who arrive walking for thousands of kilometers from their countries to its borders. It is an archetypical situation. In the age of photo-journalism and television this stream of exhausted, partly traumatised and diseased people marching on reminds Germans of mature age of similar streams of miserable German soldiers marching into Russian camps as Prisoners of War around 1945; of civilian people fleeing in droves from East Europe into the West in fear of the Red Army and of popular reprisals; of Jews being herded into concentration camps. Such sights of people dragging themselves along interminable roads have horrible associations created during and after the notorious Third Reich.

As a result, it has become virtually a taboo to publicly revolt against the refugee influx as any criticism might be denounced as xenophobic. Even then, there have been massive demonstrations against the refugee policy by the Pegida group in some major cities.

But they were greeted by equally massive counter-demonstrations.

The section of society which appears to turn against the newcomers with anger and even hate are the poor. They have lived on the unemployment dole for many years or have managed a mere subsistence-level retirement pension and barely scrape through in daily life. Many of them have been refugees themselves from East Europe. Their grievances are simple. Although they have lived in Germany for decades and have grown old there, they have not been greeted by the same “welcome culture” as the refugees arriving this year. They may have applied for housing assistance or loans or any other benefit many years ago, yet they were not considered with the same alacrity as, for example, a poor Syrian Muslim family speaking not a word of German. This section of German society would not voice its anger in public, but the market places, the social networks and the Letters to the Editor columns are swamped by hate-speech.

This scenario is contrasted by the astounding eagerness of many, possibly most, refugees to adjust, learn the language and start a new life. The energy and freshness of their approach to life is a welcome departure from the jaded and spoilt attitude which many young Germans reveal. I met a young Tunisian boy in the train who, after two months, already spoke German passably well and confidently worked the train system. A Kurd led his large family to their destination, Luxembourg, asking me repeatedly when and where to change the train and giving me a hug as farewell. A Syrian boy, sitting next to me clutching his ticket, was however overly quiet and hardly reacted when I informed him where to get down. He looked dazed, traumatised. In fact, I was told by a doctor that half of the refugees from faraway had traumatic experiences and needed psychological help.

The refugees do not yet really define the public spaces in cities and towns. Most of them still live in their camps. The government agencies wish to decide on the fate of each individual as swiftly as possible. Those who are allowed to remain are being resettled in empty houses all over the country and tens of thousands of houses are scheduled to be built. In my home-town Boppard on the river Rhine, I discussed with a friend where refugees could be settled. We immediately hit upon half a dozen houses, among them empty school buildings and halls, suitable for accommodation. The one hitch often is fire safety. There have been numerous attempts of arson on houses occupied by refugees in the past few months. Fire safety is a must and is costly to install.

Even then, it will not take long until the presence of migrants will become a feature in most towns and even villages. What kind of Germany will this transformation of society create? How will Germany look like in ten and twenty years? Colonising countries like the United Kingdom and France have led the way and shown how a multi-ethnic and multi-cultural society might look like.

Their efforts at integration have been more or less successful. Yet, immigrant ghettoes and a ghetto mentality could not be altogether avoided. I hope Germany can learn from the experience of its neighbours. We need to learn a new competence in dialogue, in acceptance and tolerance without losing ourselves. Such competence needs not only willingness but also training.

Germany is preparing for the Christmas season. No need to familiarise the newcomers with the Christian spirit as this festival is vastly commercialised and almost bereft of religious sentiments. However, some archetypical images of the Christmas story stick in public memory. For example, the story of the highly pregnant Mary and her husband Joseph who are on their way to register themselves in a census. Mary delivered the baby Jesus in a cow-shed “because there was no room in the inn”. Christ, the Rejected One! Then there is the story of Mary, Joseph and the baby Jesus fleeing from Israel to Egypt for fear of being killed by Herod. Christ, the Refugee! These narratives will strike a new chord this year.