What Mahatma Gandhi Means to me

Today India celebrates the birthday of Mahatma Gandhi. It is a holiday in India and it is remembered by all friends of India outside the country. It is more than a beautiful coincidence that tomorrow, on the 3rd of October, Germany will celebrate its National Day, or its Day of Unification. Had he been alive 30 years ago, M. K. Gandhi would have been overjoyed to observe how the people of East Germany unified with the West in a completely non-violent manner. The vigils, the protest meetings, the church services, the speeches were peaceful and led to an ever-larger response until they became a mass movement. The means of protest were exactly the ones Mahatma Gandhi would have chosen. And it has often been mentioned that even though the name of the Mahatma had not been taken by the protesters, it was his influence which made this peaceful movement possible and which made it succeed.

The same situation had occurred in Poland a few years earlier when one man, Lech Walesa, was able to shake an entire country by his determined peaceful protest because a large mass of people was unified behind him. At the moment a similar scenario is being played out in Belarus and we all observe with bated breath whether this large movement against a dictatorial president will remain peaceful and whether it will ultimately succeed.

Something significant has happened. Mahatma Gandhi’s concept and practical realisation of a non-violent social struggle against a political opponent, in his case, the British Raj, has become a common tool to break unjust regimes. His methods of Satyagraha, the Search for Truth, and Ahimsa, Non-violence, have entered the collective sub-consciousness of Europe. The peoples of Europe have made Gandhi’s methods their very own without, anymore, tracing their origins to India and to the Mahatma. Non-violent social and political protest has become as much European as it is Indian.

As a result, Mahatma Gandhi has been the single most important Indian influence on European social and cultural life in the 20th century. No other Indian thinker, Indian saint or freedom fighter has been as influential as M. K. Gandhi. Not even Rabindranath Tagore – who, as you know, I have studied, translated and written about – has left as many traces in European memory. Nor Sri Ramakrishna whose monastic order is active world-wide including in Germany. The first monks of the Ramakrishna Mission entering Germany had been active in Wiesbaden near Frankfurt. Not even Sri Aurobindo whose thought-processes have a kinship with the European mind; nor Subhash Chandra Bose who had a personal relationship with Germany during his life-time, have aroused the European imagination as much as did Mahatma Gandhi.

In this context it is noteworthy to mention that a large number of German books and essays on Mohandas Karamchand Gandhi draw the comparison between Gandhi and Jesus Christ. Many authors see in Gandhi a Christ-like figure. Most Indian personalities, Sri Ramakrishna, Swami Vivekananda and Sri Aurobindo among them, have eulogised Jesus Christ as a divine being who came on earth as an Avatar, as God in a human form. Mahatma Gandhi was, to my knowledge, the only one who emphasised the humanity of Jesus Christ. He saw in him a heroic human person who grew to greatness through his suffering for the sake of human mankind. In this, Mahatma Gandhi was closer to the Christian mind than most other Indian religious figures.

I came into contact with the life and philosophy of Mahatma Gandhi when I was barely 18 years old. That was the age in which the German government recruited its male citizens to do military service. I had decided much earlier that I was not prepared to hold a gun and aim it at a human being. Already as a teenager I had the mind of a pacifist, and I remain a pacifist even now. I am speaking of the 1960s when the German government did allow its young men to refuse military service; however, they had to appear before a tribunal of the Defence Ministry to explain their reasons. If the tribunal was convinced, the young men were allowed to do an alternate service, for example in a hospital or in an old age home. I prepared myself for my defence before the tribunal by studying the speeches of Mahatma Gandhi. And I quoted Mahatma Gandhi while defending my pacifist viewpoint. I passed the interview at the first instance.

Immediately after my University studies, I left for India to be a German teacher at the Ramakrishna Mission Institute of Culture in Kolkata. That was in 1973. I had wanted to stay for a year, at the most for two years, and then enter my chosen profession of a cultural journalist. But until 31st March of this year I have remained in India continuously – first in Kolkata, then in Madras, now Chennai, and since 1980 in Rabindranath Tagore’s University town Santiniketan. It needed a pandemic to “throw me out” of the country which I had begun to love so early. I became a writer, translator and cultural journalist in India, active in the cultural dialogue between India and Germany. During these 47 long years I have had numerous contacts with the life and the philosophy of Mahatma Gandhi and with numerous disciples of the Mahatma.

The most precious contact I had was with Ramchandra Gandhi, a grandson of the Mahatma – lovingly called “Ramu” by his friends. For one year, he became a guest professor of philosophy at Visva-Bharati University in Santiniketan. We met often. He had the humility of visiting me in my one-room living quarters, he invited me to his discourses and lectures. The originality of his mind was stupendous. Immersed in contemplation, wonderful philosophical ideas emerged from the depth of his soul. They were touched by the pain and the compassion for the suffering of others. He wrote a beautiful Foreword for one of my books. He was a support for me in my lonely pursuit of my writing and of my work among the village people. After Ramchandra Gandhi shifted back to Delhi, I met him at the India International Centre whenever I visited Delhi which was at least once a year, until he expired.

The national television channel ZDF, located near Frankfurt in Mainz, asked me to guide them while shooting a film on Mahatma Gandhi. This took me to Gujarat where I met relatives of Mohandas and some of his disciples still alive. I witnessed the setting in which he worked and acted out his ideas. In the course of over four decades in India I translated into German and compiled three books with the writing of Mahatma Gandhi. The most recent one was published last year to commemorate his 150th birth anniversary.

It must also be mentioned that probably I would not have started my work in the villages of the Santal tribals at some distance of Santiniketan, had it not been for the influence of Mahatma Gandhi. His emphasis on absolute simplicity of life, his insistence on sharing every superfluous penny with the less fortunate reverberated in my mind and stirred my soul.

Reading the lectures, articles and letters of Mohandas Karamchand Gandhi is like entering a charmed circle. I have often wondered how Gandhi was able to create his magic on us. I should think that it is his uncompromising attitude, his radical adherence to Truth. He does not accept exceptions, neither mitigating circumstances in which his principles may be weakened. Satyagraha, Gandhi’s pursuit of Truth always means the whole and full Truth. All of us of a mature age know that in public as well as in private life, we sometimes must accept the beauty of compromise. Gandhi would have none of it. He lived his life as if there was no Maya, that is, no middle-ground between Absolute Truth and a lie.

This rejection of compromise when it comes to Truth has fascinated me throughout these last decades. Gandhi had thrown open his private life to public gaze. In the Sabarmati Ashram, his hut was open to all at all times. He had no privacy. He wanted his life to be absolutely transparent to the outside world. He advocated a complete and public confession in case of any faults or shortcomings, and he practised it. We all understand how unnerving it must be to be publicly scrutinised at all times. For Gandhi this was part of his Pursuit of Truth, his Satyagraha.

The same scrupulous approach Gandhi chose when he practised Ahimsa, Non-violence. The idea of Non-violence has its intricate problems. When I stood before the tribunal which decided on my application for the status of a conscientious objector, I was asked: Will you kill in self-defence? – What will you do when your mother is attacked before your eyes? … Obviously, the answer is not easy and cannot be given with general validity. The answer depends on the circumstances at a particular moment. Hence, a votary of Non-violence must, at any given moment, be alert to the varying demands of Non-violence. Non-violence is dynamic and sublime, it cannot be defined once and for all. That makes Non-violence such a fascinating and, indeed, vexing principle.

I have been much influenced by the Yoga-Sutras of Patañjali, particularly by one Sloka on Ahimsa. Here it says: “If you are well-grounded in Non-violence, you create an atmosphere of peace, to the effect that all those who come into contact with you, give up their enmity.” (Chapter 2, Sloka 35) To me this dictum is the foundation of the validity of Non-violence. Mahatma Gandhi believed in this absoluteness of Ahimsa and propagated it all his life.

Yet, as a German who is aware of the legacy of the German people, there is also reason for doubt in the absoluteness of Ahimsa. I point to the correspondence between Mahatma Gandhi and the German-Jewish philosopher Martin Buber. During World War II, Gandhi had publicly advised non-violent mass protest to the Jewish people. Martin Buber was alarmed by this naïveté. The brutality and hatred of the Nazi mass murderers could not be compared with the British colonial rulers. Martin Buber felt that no amount of Non-violent Action would have persuaded the Nazis to become human and civilized.

Let me sum up my talk with a famous quotation of Mahatma Gandhi which has extreme contemporary relevance: “The world has enough for everyone’s need, but not enough for everyone’s greed.” Does this quotation not encapsulate the solution of our most basic and urgent problem: climate change and the degradation of the environment? Could we as Indians and friends of India not be in the forefront of such a solution, guided by Mahatma Gandhi? The dynamics of the Pursuit of Truth and of Non-violence must obviously result in a better world not for us humans alone, but for animals and nature – the environment – as well. 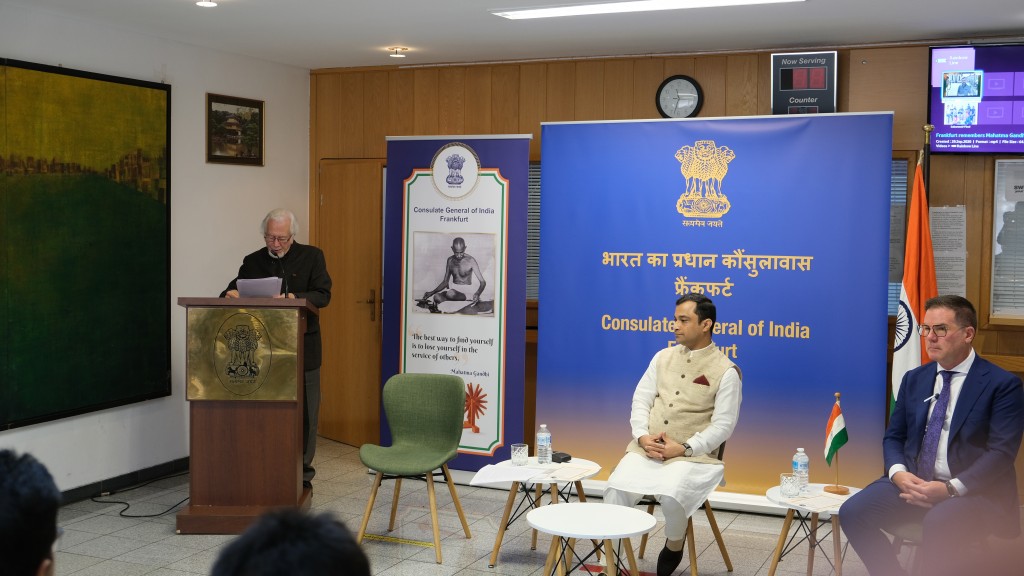